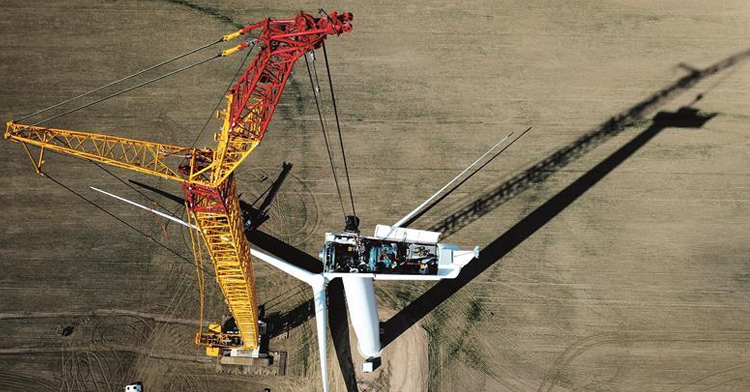 The wind power generation market has seen mostly steady growth in the United States during the last three decades. A direct result of this trend is the increased demand for cranes and vertical access equipment to maintain those wind turbines. In a recent story, American Crane & Transport (ACT) Magazine summarized how wind power got its start and where it stands today in relation the crane industry.

The wind power industry began in the early 1980s, mostly in California. Tax incentives at that time were for installation only, so cost issues with reliability and low energy production developed. Congress passed the Production Tax Credit (PTC) in 1992, which stimulated technological improvements because investors were encouraged to focus on sustaining energy output and not just initial turbine installation. PTC expired and renewed several times in the years that followed, which brought about a roller coaster effect to the industry, but overall growth has remained steady. By the end of this year, PTC will be completely phased out, however, growth in the industry is expected to remain strong.

What do cranes have to do with wind energy?

More than 56,800 wind turbines currently operate in 41 states, plus Guam and Puerto Rico. Wind power accounts for a little more than 6% of electricity generated in the U.S. with over 100,000 Americans from all 50 states working in wind. With all those turbines in operation, wind farm maintenance has seen tremendous growth, thus the need for services of crane and transport companies. What gets put up must eventually come down at some point. Damage to components and even the towers themselves prompt the need for maintenance and/or replacement, so the use of heavy equipment transport and a crane is the only way to provide this service.

Jobs that cranes provide include replacing rotors, gear boxes, generators, nacelles (housing panels and pieces) and damaged blades. Many of the wind turbines have an on-board service crane or hoist for lifting small parts, but a mobile crane is usually needed to lift everything else. Ironically, the biggest challenge to a crane accessing a wind turbine is the wind itself, because excessive wind speeds will hinder safe operations. Most of the jobs are conducted at heights of 270 to 300 feet, and newer turbines can rise as high as 330 feet. Types of cranes used are typically all-terrain and sometimes lattice boom crawlers.