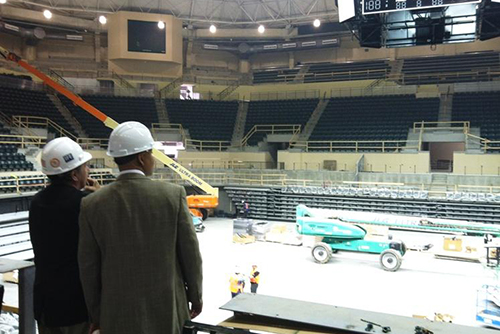 The USF Sun Dome in Tampa underwent a $35 million overhaul to give the aging facility 30 more years of life. According to the St. Petersburg Times, it took 126 miles of electric wire, 25 miles of fiber optic cable and nearly 200 tons of steel. This week, renovations to the University of South Florida Sun Dome were finally revealed.
Updates include modernization of the arena’s 10,000 seats, a new scoreboard, new concessions, restrooms and an office building and face lifts to entryways. All the building’s sound, broadcasting and lighting systems were updated, too. In the process, the construction firm, Skanska, removed and recycled over 10 million pounds of debris.

When the demolition first began, the inside of the Sun Dome looked nothing like the finished product they were headed for. Excavators and trucks maneuver around piles of concrete and debris gathered in different areas of the ground floor. In the midst of this activity was CCO Stanley “Bubba” Tillis in his Grove GMK 5240-ton mobile crane. Oiler Will Mercado stood by as both men were waiting for the word to start lifting a 34,000 lb. seating section in D-3.

The client was Kimmins Contracting, a Tampa-based company that provides high quality, specialty-contracting services to markets nationwide. Some of these services include earthwork and grading concrete paving, directional drilling, tunneling, demolition and more.

“In addition to once again being a first-class facility for USF sporting events, the Sun Dome will now be a desirable location for Tampa Bay-area concerts and conventions,” said Darryl Salustro, Skanska project executive, in a news release. “We’re excited the project took less than a year to complete and was done on time.”

The first event in the renovated facility will be USF graduation ceremonies on Friday, May 4th.