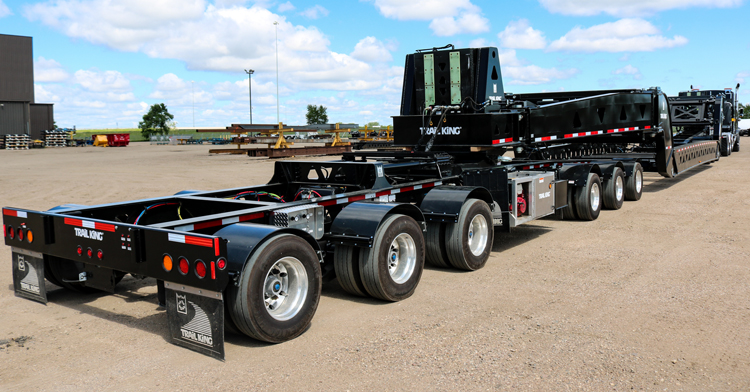 Most of us have seen them on the roadway. Trail King heavy haul transporters are typically pulled by a semi-truck while carrying large equipment, vehicles, gravel, liquids, grain, transformers, even rough terrain cranes and crane pieces to be assembled at the work site. For over 40 years, Trail King has been a reliable partner to the agriculture, materials hauling, industrial, and construction industries, just to name a few.

Trail King Industries started in 1974 as Western Ag Sales, based in Mitchell, South Dakota. The company sold and distributed agricultural equipment manufactured by other companies. Four years later they acquired Plains Industries, makers of Trail King trailers, and quickly expanded the product line to include trailers with hydraulic tails and detachable goosenecks. One of their most revolutionary product developments was a gooseneck that could be attached and detached by one person in the span of 60 seconds. By the end of the decade, the company’s entire focus was devoted to production and sales of Trail King trailers. Trail King joined the Specialized Carriers and Rigging Association (SC&RA) in 1983.

A new 67,500 sq. ft. manufacturing facility was opened in 1987 and enlarged two times shortly afterward. Trail King later expanded their product line to include dump trucks. Their current headquarters, employing over 450 and still located in Mitchell, is state-of-the-art and covers 295,000 sq. feet.

Trail King’s primary market is specialized transportation, with heavy haul trailers in use all over North America. Additionally, they manufacture dual lane transporters, steerable dollies, multi-axle trailers and more. Their motto is “Look for the triangles,” which refers to the triangle hole pattern found on many of their products.

The company partnered with Goldhofer in 2019 for cross marketing and international distribution.