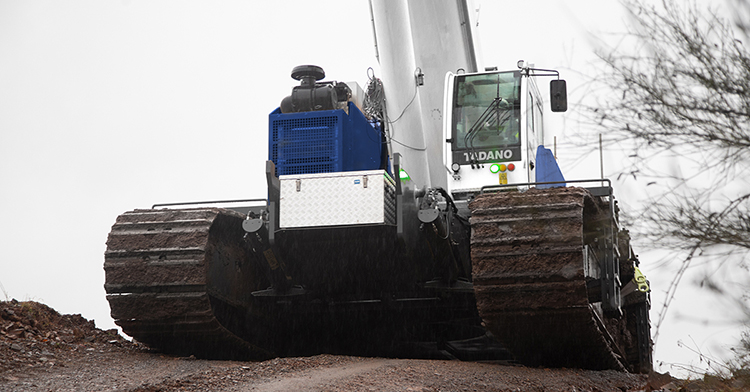 Terex Corporation sold its Demag Mobile Cranes division to Tadano in early 2019, and their first telecrawler crane manufactured since the merger was recently introduced. The new Tadano GTC-2000 telescopic boom crawler crane was designed and built at Demag’s facility in Germany. It’s a strong addition to Tadano’s telecrawler portfolio.

Equipment Journal reached out to Ingo Nöske, director of product management for crawler cranes. “Our goal is to become ‘One Tadano’. With the first telecrawler produced in Germany and branded by Tadano, this vision is now becoming a reality,” he stated. “With the integration of the GTC-2000 into the Tadano brand, we’re bringing the lone warrior into the family, so to speak.”

The AC and CC crane models will continue to be branded as Demag.

Bridging the distance between weight classes

The Tadano GTC-2000 boasts a lifting capacity of more than 170 tons, bridging the gap between the 140 and 240-ton classes. It offers the flexibility of a 650-ton maximum load, adjustable track width for symmetrical and asymmetrical configurations, and the ability to luff down and retract the boom so that the crane can maneuver underneath low clearance structures such as roofs.

This crane already has the longest main boom length in its class at 98 feet, but with a variety of extension lengths it can achieve a maximum tip height of 272 feet. These main boom extensions can be mechanically and hydraulically offset. The shortest extension measures 16 feet and can be folded to the side for easy transport.

The GTC-2000 is considered a compact crane for its class. The width and height of the base crane each measure just under ten feet for transporting. The heaviest transport unit weighs 51.2 tons but removing the track width extension beams will bring that number down to 46.3 tons.

This crane will be available in North America during the second half of this year.

Click here to read all of the details about this new addition to the Tadano product line. Image above courtesy of Equipment Journal Magazine.