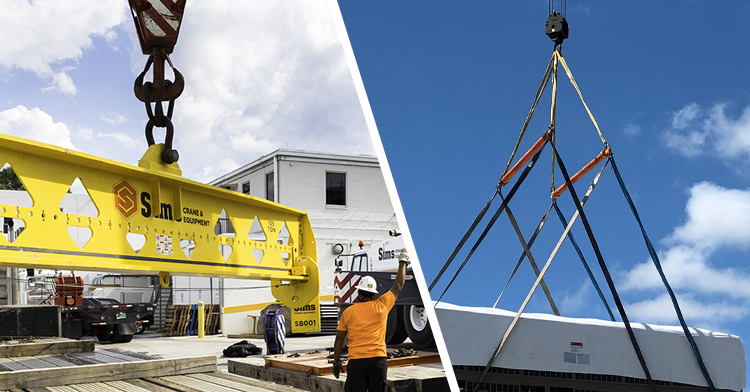 When it comes to lifting a load with a crane, in most cases the operator must decide between using a lifting beam or a spreader bar to properly stabilize and distribute the weight of the object being lifted. Both tools attach to the hook of the crane, but the variation between them is sometimes confusing. The CL of Charlotte website recently published a helpful article that explains the difference.

What is a lifting beam?

A lifting beam is composed of a simple design: a horizontal beam hangs at a single attachment point on the top surface which connects directly to the crane or hoist. Two lugs are located underneath the beam which can be placed in fixed or variable positions. The object to be lifted is attached to the lugs with a hook or sling. The beam is designed to bend slightly at both ends as the object is lifted, thereby causing the stress to be placed on the bottom slings and through the beam itself. Lifting beams are ideal in locations with limited headroom, such as inside a building or underneath a structure.

What is a spreader bar?

A spreader bar, also called a spreader beam, is a simple bar that holds two slings apart and distributes the weight over two or more pick points. Two lugs on top of the bar are each attached at an angle with a chain or sling that is connected to the crane. They’re most often used for very wide or heavy loads. The spreader bar is lighter, more compact, and less expensive than a lifting beam, and designed for the weight to be distributed equally across the length of the bar. Forces are compressive instead of bending.

What are the differences between the two?

The design of each of these devices determines how force is transmitted and how it’s used. A lifting beam absorbs most of the stress of the load, while the spreader bar shares that stress with the slings. A lifting beam is simple to use, requires less overhead clearance and rigging but its costs are considerably higher and stability is less than lifting beams.