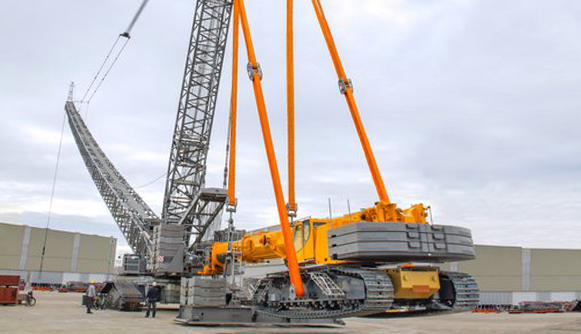 Liebherr has introduced a new boom erection concept for crawler cranes, which allows an auxiliary crane to replace the majority of the assembly ballast. The new approach should work particularly well on wind farms, where large amounts of counterweights is needed just to raise the boom, and ballast trailers transport is difficult and expensive.

In a demonstration given by Liebherr at its Ehingen facility, the company showed how an LTR 1220 telecrawler can be used as derrick ballast.

The LTR 1220 replaced 308 tons of the 385 tons of derrick ballast required to erect and lower the SL10DFB main boom system, which had a 502-ft. main boom and 39-ft. fixed jib. The remaining 77 tons of ballast plates are still required as suspended ballast for hoisting standard wind turbine components.

During erection and lowering, the auxiliary LTR 1220 was used as a counterweight, attached to the telescopic boom using an adapter. The crane and ballast plate are attached to the derrick jib using a cross bream with strap loops. The hook block of the LTR 1220, meanwhile, remains reeved, enabling it to be used for other tasks soon after erection is completed.

As well as reducing the amount of ballast – and ballast handling – required on site, the procedure also improves safety as the LTR 1220 can quickly provide ballast where required, if strong winds arise. The demonstration was attended by more than 60 members of the industry who either operate an LR 1600/2 as part of their fleet, or work in the wind power sector.

Using a hoist with a load of 78 tons and a radius of 79 ft., Liebherr simulated the assembly of a wind turbine with a 492-ft. tower.

The new concept is compatible with all long boom systems up to 512-ft. long, on both Liebherr’s new SL10 and SL13 windfarm-focused boom systems, as well as the existing SL4 system.