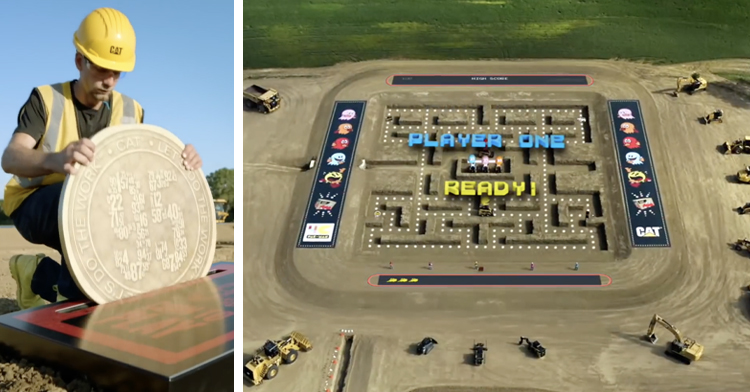 It’s been a few years since Caterpillar, Inc. created a Cat® Trial video to demonstrate the capabilities of their powerful machines. The videos are wildly popular with customers and fans of the heavy equipment manufacturer. Past Cat Trial videos include construction of the largest sandcastle in the world, built in Brazil, and certified by the Guinness World Records organization. Another video features a huge Jenga block game played in a warehouse at their Edwards Demonstration & Learning Facility near Peoria, Illinois.

Celebrating in a big way

Caterpillar celebrates their 95th anniversary in 2020. To commemorate this event, they teamed up with Bandai Namco, makers of the Pac-Man video game which turns 40 this year. The decision was made to build a massive Pac-Man gameboard, have Pac-Man and the ghost characters each represented by a skid steer loader, and produce a video of the “game” being played. Planning began in March, which required teams to work from home due to the outbreak of Covid-19 pandemic in the US.

A large field was chosen at Cat’s 720-acre Edwards property. Construction began in August with 5,500 tons of earth pushed out, water added, then moved back and compacted over a week’s time. This was done so that cave-ins would be avoided when the maze was dug. The layout was combined with GPS technology and Cat Grade 3D software to replicate the gameboard perfectly without stakes in the ground or paint markings. A drainage system was built in, which was critical because a significant amount of rain fell during construction. Overall grade was 1% from top right to lower left, north to south.

One excavator was used to dig out the maze, which took about 70 hours. This was to ensure that technique and bucket teeth markings would be consistent throughout the entire maze. A typical basement excavation has 4 to 7 corners; the Pac-Man maze has 151 corners. The operator continually dug while wheel loaders carried away the dirt.

The finished gameboard measured 162.4′ x 180.4′, which was 19,040% the original scale of the maze in the classic arcade game. Each lane measured 12′ wide x 4′ deep so the top half of the machines were visible. Five 236-sized skid steer loaders entered via buried shipping container tunnels and maneuvered through the maze, each remote controlled. Operators were Cat customers, expert operators and gamers. They stood on berms built outside the maze, then looked down on the machines with remote controls in hand.

Traditional, GoPro and drone cameras captured 84 hours of raw video footage, which was edited down to a 2-minute presentation. Animated Pac-Man and ghosts were added, plus pellets and bonus prizes all computer-generated by Caterpillar’s senior motion designer.

The completed maze remained in place for two weeks. The Cat Trial video concludes with bulldozers leveling the gameboard, which represents level 256, the last level of Pac-Man in which the game blitzes out and breaks.

Cat Trial 9: PAC-MAN can be viewed by clicking here.

The behind-the-scenes build video can be viewed by clicking here.

Images above courtesy of Caterpillar.