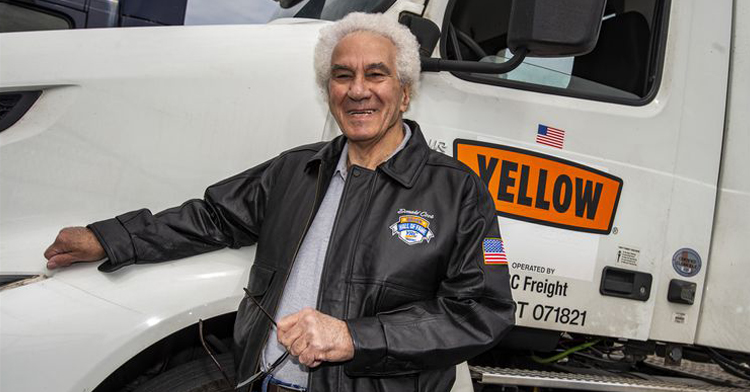 Don Cook is a trucking legend among clients and fellow employees at YRC Freight. The 47-year veteran trucker recently passed the four million benchmark of miles driven without a single accident, not even a fender bender. Approaching age 80, his eyes and reflexes are still quick and sharp, and after nearly five decades his love of the open road has not faded.

Don makes his home in Snydersville, Pennsylvania but grew up in Belleville, New Jersey. His father drove a tour bus for various entertainers from the 1940s and was away from home for long periods of time. Occasionally Don would wake up in the morning to see his dad with the bus out front. “He’d give me a ride to school on the bus and I wouldn’t see him again for six months,” he said.

Don drove a factory truck after high school but was eventually hired by Roadway Corporation as a tractor-trailer driver. In 2009, Yellow Transportation merged with Roadway to become YRC Freight. In 2012, the company presented Don with a leather jacket and a truck with his name on it as his career odometer had just ticked past three million miles. Today, one million miles later, he attributes his success to skill, patience and a little luck as drowsy, drunk and distracted drivers have stayed out of his way.

Jokingly, Don says, “I’m not retiring. I’m still a young pup. And my wife would drive me crazy.” He and Dolores Cook have been married 58 years and she’s been his rock the whole time. “If it wasn’t for her supporting me, I wouldn’t be here,” he said.

Don used to drive as far as Texas and California and has warm memories of time spent going through New Mexico and Arizona. But nowadays he stays close to home. The furthest he travels is 400 miles to Akron, Ohio where he stays overnight.

Click here to read more about Don Cook’s milestone accomplishment at Morning Call. Photo above courtesy of their website.