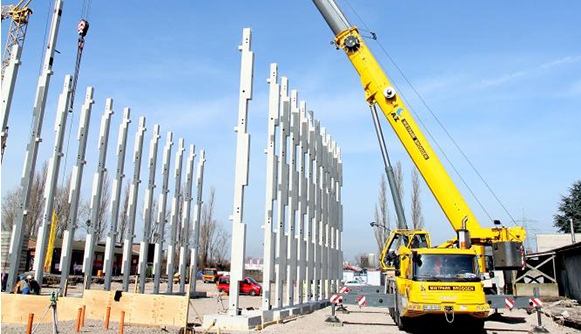 Astrid Hager-Guthrie, global product director for all-terrain cranes at Manitowoc Cranes, discusses cylinder drift with Lift and Access. Drift not only occurs in cranes but also in telescopic handlers, aerial lifts, and other equipment that uses hydraulic cylinders.

LA: What is hydraulic cylinder drift?
AH-G: Cylinder drift due to hydraulic leaks will appear as gradual movement or drifting of the components. Operators will notice movement in the load over time, or indications of change in position; for example, changes in LMI readings. Drift from thermal contraction would be seen as intermittent short movements called slip-stick.

LA: How common is this occurrence?
AH-G: Cylinder drift due to hydraulic leaks is not common and is normally the result of contaminants in the oil or failure of a component. Thermal contraction is normally only encountered in situations where the crane is left in position for a significant time and the temperature of the oil is allowed to drop.

LA: Are some kinds of hydraulic cylinders more prone to developing drift?
AH-G: The issues that can cause cylinder leaks can occur on any cylinder, and the resulting movement can vary based on where the cylinder is installed in the system.

LA: Why is this a problem?
AH-G: Cylinder drift can result in lowering of the load as the telescope cylinder(s) retract. The boom angle will decrease as the lift cylinder retracts. The crane levelness will be affected if an outrigger jack cylinder retracts. Further, thermal contraction coupled with improper lubrication or improper wear pad adjustments may, under certain conditions, cause a “stick- slip” condition in the boom. This condition could result in the load not moving smoothly. Stick-slip due to thermal contraction is an intermittent cycle of movement. The oil cools, and the pressure drops. Friction resists any movement until the load on the cylinder overcomes the friction in the component. There is a short movement resulting in the pressure building up in the cylinder stopping the movement. If the oil continues to cool, this could be repeated.

LA: Does cylinder drift tend to show up under load? For example, if the operator swings the upperworks over one outrigger jack that has drift, does the cylinder tend to drop more than if the crane’s weight is distributed evenly over all the outriggers?
AH-G: The movement due to cylinder drift will depend on the load being supported and the position of the cylinder.

LA: How much drift do you need for it to be  a problem?
AH-G: The amount of drift needed to be a problem will depend on the lifting configuration.

LA: Could you elaborate on the kinds of situations where drift is not much of a problem and those in which it is?
AH-G: Each situation would need to be considered. Obviously, if you are doing a task that requires fine movement, drift could create problems. Anytime hydraulic leaks are creating cylinder drift, the crane should be repaired before the operation is continued. The operator can take action to mitigate drift due to thermal contraction, and each operator should be trained to be aware of the issue and the manners to mitigate it on each model of crane.

LA: Do ANSI, SAE, OSHA or other standards and regulatory agencies define limits of drift?
AH-G: No.

LA: What are the possible causes of drift?
AH-G: Cylinder drift can be caused by a hydraulic leak through a holding valve, piston, or rod seal, or by imperfections in welds or material. It can also be caused by thermal contraction inside the cylinder. Hydraulic oil expands when heated and contracts when cooled. This is a natural phenomenon that happens to all liquids. Thermal contraction will allow a cylinder to retract as the hydraulic fluid in the cylinder cools.

LA: How do you tell which cause is the culprit in a particular situation?
AH-G: Equipment manufacturers provide instructions on the proper inspections and tests needed to allow a trained technician to diagnose the cause of cylinder drift.

LA: How do you fix each cause?
AH-G: Solutions to deal with cylinder drift may include repair of the component (for example, valve or seal replacement). In the case of thermal contraction, proper lubrication and wear pad adjustment is important to permit the boom sections to slide freely. Also, the operator needs to monitor the lifting situation, and if required, recharge the hydraulic cylinders periodically.

LA: What can equipment owners and users do to prevent, delay, or minimize drift?
AH-G: Proper maintenance and lubrication are essential. Additionally, the crane operator must have proper training to recognize and respond to cylinder drift or thermal contraction. Again, each situation needs to be considered. Maintenance involves looking for leaks and repairing them when found. Functional testing should also be performed to determine if cylinder drift is occurring. When detected, hydraulic issues should be corrected. Each crane manufacturer will specify the appropriate maintenance and inspection to be performed.