The US Coast Guard Marlin Gets a Lift 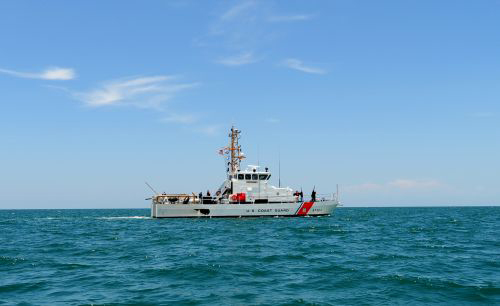 The Hendry Corporation, based out of the Port of Tampa, completed a first of its kind lift last week with the United States Coast Guard (USCG). The USCG brings their ships into dry dock every two years for inspection and repairs. Hendry already had one large ship in dry dock, but came up with a way to have two ships in dry dock at the same time. They created a unique platform that resembles the bottom of a smaller dock lift that enabled them to use a crane to raise the cutter out of the water, and onto dry land for its inspection.

The Marlin is an 87’ cutter home-ported in Fort Myers Beach, Florida. The Cutter primarily focuses on recreational boating and fisheries law enforcement.

Sims Crane & Equipment’s GMK7550, operated by CCO Bill Piper and Oiler Charles Franklin, rigged the platform for the lift on a separate stage then placed it in the water. At that point, a diver went into the water, and the cutter was guided over top of the platform. The Cutter then carefully maneuvered over it to get perfect placement, and the diver below gave clues as to where it need to be moved to be seamlessly and safely in place. Once the diver gave the ‘all clear’, Bill was able to complete the bulky lift, and the Marlin was elevated out of the water and placed onto dry land where she could receive her scheduled TLC.

The lift was a first not only for Hendry, but also for the USCG. All went well, and it will enable the USCG to have additional ships worked on simultaneously at the Port of Tampa, which means they’re able to be back protecting our waters and coasts quicker than before.

The Hendry Corporation was founded in 1926 by Captain F.M. Hendry. Their customers include many commercial maritime companies including the U.S. Coast Guard, U.S. Navy, Army Corps of Engineers and the U.S. Army.