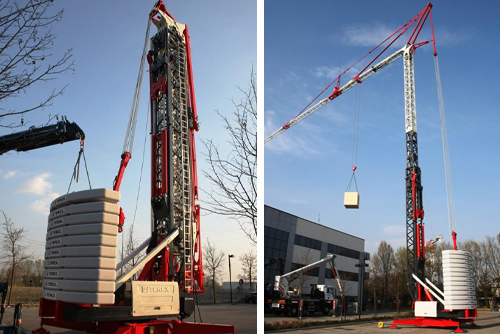 Terex has unveiled its largest self erecting tower crane, the telescopic Eazy 90. The crane has a maximum capacity of six tonnes, maximum jib length of 45 metres and a maximum under hook height of 46 metres. At 45 metres maximum radius it can lift 1.4 tones.

The Eazy 90 also has a telescopic tower and the option to add in up to three tower sections – mounted and climbed from ground level. There are 15 under hook heights varying from 14.5 metres to 46 metres helped by the three different jib angle settings – horizontal, plus 15 degrees and plus 25 degrees.

Transportation is one of the key areas for self erecting tower cranes and the Eazy 90 has three different axles. Job site axles allow movement around the site (these can be connected together to simplify movement around site) and two road axles allowing 25 or 85 km per hour road speeds to meet different regulations.

The fully hydraulic erection means that erection and operation can be achieved by a single operator. Ballast can also be installed without the use of a second crane or loader crane by using its own service derrick. Maximum ballast is 37.1 tonnes made up of 14, 2.65 tonne blocks. Jib lengths can vary from the 45 metre maximum. Folding jibs can be configured to work at 42 and 30 metres as well as a 37 metre modular jib. The crane can work at six tonne capacity up to 13.45 metres on the 45 metre standard jib, and 15.26 tonnes on the folded 30 metre jib.

The crane is controlled by a modern ECU system allowing movements to be shown on an LCD screen. A remote control can be used to erect and operated the crane, with five hoist speeds giving precise and smooth control. The Eazy 90 is the first Terex self erecting crane with a name and this will continue when the range is expanded possibly later this year. Terex said that the figure 90 does not represent any performance characteristic. However it makes more sense when comparing it to its direct competition – the Liebherr 81 K and Potain Igo 85A and HDT 80. The Eazy 90 will be on the Terex stand at Intermat.