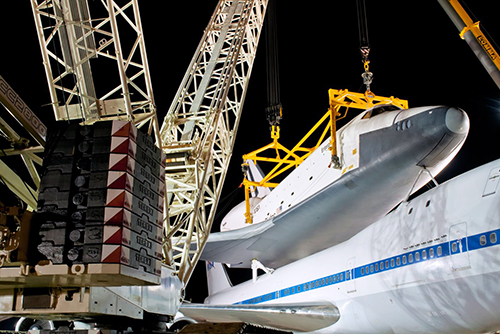 Space Shuttle Discovery, the most traveled shuttle in NASA’s fleet, ended its voyage at Washington Dulles International Airport this spring after more than 150 million miles of airtime. Its final flight took place April 17, 2012, on top of a Boeing 747 Shuttle Aircraft Carrier, where it was slated to replace the Space Shuttle Enterprise at the Smithsonian Institution’s James S. McDonnell Space Hangar at the Steven F. Udvar-Hazy Center. Before being towed from Dulles to its final exhibit place, Discovery had to be hoisted from its carrier and its landing gear lowered into place one final time, which happened with help from a Terex CC2800-1 crawler crane and South Kearny, N.J.-based J.F. Lomma Inc.’s crane and rigging team.

Lomma and the United Space Alliance work crews methodically hoisted the 196,400-pound shuttle off of the 747 Shuttle Aircraft Carrier (SAC). “You cannot describe what it’s like to be part of space shuttle history,” said Frank Signorelli, crane and rigging manager for J. F. Lomma, Inc. Josh Barnett, field service representative for Terex Cranes, who was on site to support Lomma on the lift, added, “It was a one-of-a-kind experience.”

For Lomma, planning for this job started nearly two years ago when company officials first considered bidding for the job. NASA was very specific in what equipment was required for the work. “The bid called specifically for the Terex CC 2800-1 as the primary crane to do the pick as well as all of the other supporting cranes and equipment,” Signorelli said.

Part of the reason for this lies with NASA’s experience with this crane model for a similar pick decades ago. When the 747 SAC transports the space shuttle to a place other than a space center, there is a need for crane and rigging equipment. “These picks do not happen often, since NASA already has a shuttle removal method in place at each space center,” Barnett explained.

In the early 1990s, NASA had the rare need to hoist a shuttle from the 747 SAC, and a Terex legacy brand was selected for the job. “A Demag 2800 crawler crane was used in that project as the primary crane,” mentions Jim Creek, Terex Cranes’ senior product manager for crawler cranes – North America. “NASA has a history of successful lifts with this crane.”

The Terex crane for this job, the CC 2800-1, offers a 660-ton capacity at a 32.8-foot radius, more than enough to handle Discovery’s weight. It features a maximum 196.9-foot main boom length and a variable 100-foot radius Superlift attachment to boost lift capacities. “Superlift offers an additional 4,000 to 600,000 lb (1,814 to 272,155 kg) of counterweight on the tray, which enables the crane to lift more weight further from the crane’s base,” said Creek.

The shuttle project consisted of not one but two shuttle hoists. The first lifted the Space Shuttle Discovery off of the 747 SAC for the shuttle’s eventual spot at the Smithsonian. The second loaded the Space Shuttle Enterprise onto the carrier, so it could be flown to John F. Kennedy International Airport in New York.

It took Lomma nearly three months to prepare for and arrange the pick. “We had conference calls with NASA two times a week,” Signorelli said. “Communication was often and thorough between our company and NASA.”

Lomma purchased the CC 2800-1 two years ago. It was on rent with a customer in Quebec. Upon returning to the yard, the crane was rigged to make sure the right components were in place for the job. “We ran the crane in our yard,” Signorelli said. “The (IC-1) computer screen is extremely user friendly and self-explanatory. It’s not a complicated crane to operate.”

Upon completing the dry run at the yard, Lomma disassembled the crane and sent the components to the jobsite. Lomma’s crews spent three days at Dulles rigging the CC 2800-1 and a fourth day running through test lifts to make sure everything would go smoothly.

When it came time for the shuttle pick, there was very little left to question. “NASA had everything marked out on the ground—positioning for the Terex crane, the supporting crane, and the 747,” explained Signorelli.

The additional safety requirement stemmed from the need for workers to be under the live load while unhooking the shuttle from its 747 SAC. “NASA required a 75 percent derate from the crane’s standard 85 percent chart, which is a big safety factor,” said Signorelli.

In the overnight hours, when airport activities were at a lull and winds were calm, Lomma and United Space Alliance crews began the removal of the shuttle. The 747 SAC, supporting crane lifting the front of the shuttle, and CC 2800-1 lifting the heavier back end, were all positioned according to NASA’s layout.

NASA engineers used calculations from the CC 2800-1’s IC-1 controls to map out the final position of the crane. “They wanted the connection between the shuttle and our crane to be at 112 feet,” said Barnett, “and the actual distance in the field from the center of the crane to the hook was 111.9 ft (34.1 m). They were impressed with IC-1’s accuracy.”

Slowly and with precision, the pick began with the weight shifting and then transferring to the cranes as the brackets were removed from the shuttle and carrier. After the shuttle hovered a safe distance over the carrier, a pushback tug backed it from underneath the shuttle. The shuttle was then lowered to within a few feet of the ground. Auxiliary hydraulic power lowered the shuttle’s landing gear for a final time before the cranes lowered it to the ground.

“The subtle movements offered by the CC 2800-1’s hydraulic system definitely helped with this pick,” said Barnett. “If the crews only needed 0.5 inch of movement, the crane was able to give it to them.”

A few days later, Discovery was towed to the Smithsonian and replaced the Space Shuttle Enterprise, which had been on display inside the James S. McDonnell Space Hangar since 2003. This prompted a second pick and final move of the Enterprise to its new home in New York.

Within a week after the Discovery pick, Lomma’s crews were back at Dulles, this time to reverse the process and load Enterprise on the 747 SAC. With one hoist project already completed, the second pick of the Enterprise went equally as smooth as the Discovery effort. “Enterprise was actually much lighter than Discovery, so we had no issues,” said Signorelli.

A lesser known, but vital link to the shuttle program, Enterprise never made a trip to outer space. It was constructed in the mid-1970s as a prototype tester for what became the final space shuttle design. NASA engineers ran it through a number of flight and landing test simulations to prove the validity of the concept. While NASA initially intended to retrofit Enterprise for space travel, several final shuttle design changes kept it grounded.

Enterprise, via the 747 SAC, took off from Dulles on April 27 for its final home in New York City and landed at JFK International Airport. At the same time, the CC 2800-1 crane components were derigged and loaded onto trucks and trailers heading for New York. Once arriving at JFK, the crane equipment was rigged, tested, and ready for another shuttle pick.

Originally scheduled for the morning hours of May 14, the Enterprise pick was moved up due to inclement weather. “Projected wind speeds were predicted to approach NASA’s 10 mph, which was the wind speed limit for removing the shuttle from its carrier,” said Signorelli.

Even though the CC 2800-1’s configuration for the Enterprise pick was rated for a maximum wind speed of 25 mph, NASA’s tighter wind threshold was followed. “Therefore, they moved the pick up two days to start on May 12,” he added.

Under clear weather conditions and wind speeds flirting with NASA’s threshold, Lomma began the pick just before midnight. Similar with the Discovery project at Dulles, careful planning and constant communication allowed the pick to be completed successfully.

By 7 a.m. on May 13, Enterprise was loaded onto a special wheeled transport and moved into a hangar at JFK. It embarked on a three-day journey on the Hudson River in early June. Its final destination is the Intrepid Sea, Air and Space Museum in New York City.