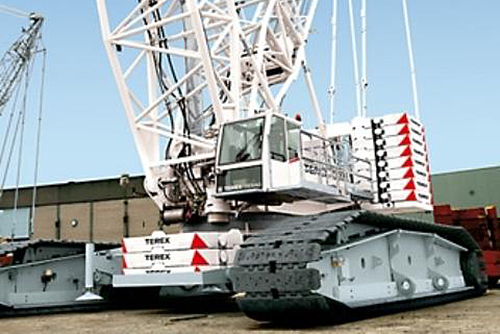 Terex will unveil the long rumoured and long awaited successor to its incredibly successful 660-ton CC2800-1 crawler crane on October 8th and 9th.

We originally predicted this new model back in September 2010 (see Cranes & Access 12.6 page 49) when we expected its replacement might be rated at up to 750 tons.

The new model has taken a little longer to arrive than we expected, but it has some big boots to fill, the CC2800-1 was developed from the CC2000 of the 1980s and had been refined developed and stretched over the years as far as it could possibly be taken, in the process over 300 units were delivered, making it one of the most popular successful large crawler cranes ever built. The CC2000 and its successors put Demag – later Terex Cranes – firmly on the big crawler crane map, but in the past two to three years the crane’s aging DNA prevented further development and enhancement and called for a total redesign in order to keep up with the latest new products from Liebherr in the 600 to 750 ton range. Expect the CC2800-1 replacement to be a 600 tonne base model which will have development potential into a family of model extensions up to 750 tonnes capacity. The new model is likely to have better capacities, be easier to move and erect, be more flexible in terms of booms, jibs and counterweight configurations, with improved cab, track drive system and other enhancements, much of which will be adopted from the new models Terex has launched over the past three to four years or so.

We will be at the launch in October and look forward to reporting on the first totally new Terex crawler crane in this market sector for a generation.