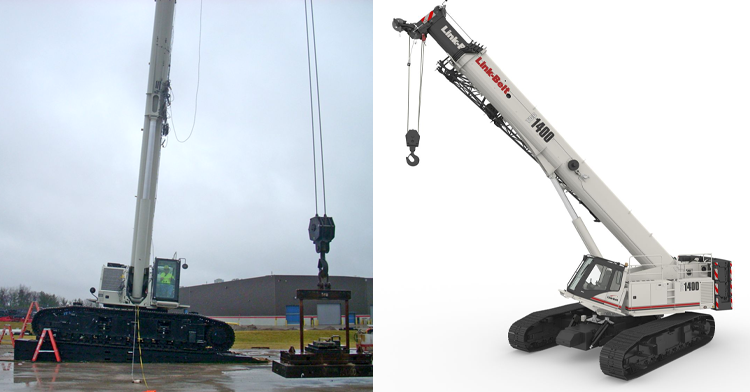 With an eye to better serving its current customers and expanding into a wider range of markets, Link-Belt Construction Equipment, Lexington, Kentucky, will unveil several new crane models this Fall. One exciting addition to its product line is the TCC-1400 telescopic-boom crawler crane, a 140-ton capacity telescopic crawler crane with a 195-ft. boom—the longest in its capacity class.

Link-Belt reports that despite a sluggish crane market over the last four years, telescopic-boom crawlers have been a growing segment in its crane business. As the fourth addition to its TCC family, the 140-ton unit will continue to help transform the industry’s view of telecrawlers from niche products to purpose-built machines for general construction work.

Boom to the max

Key to the TCC Series’ expansion will be the TCC-1400’s 195- ft., six-section boom and three-piece, onboard offsetable fly jib. Up to now, Link-Belt’s telecrawlers incorporated a full-power boom, but the TCC-1400 will use Link-Belt’s patented pin and latching boom system.

“Full-power booms use multiple cylinders and a cable system at the end that adds to the weight of the boom, and takes away from your capacity when the boom is extended,” says Scott Knight, product manager, lattice and telescopic crawler cranes. The pin and latch extend/retract system reduces the boom weight and increases lifting capacity at longer boom lengths. Operators can monitor the boom functions in the cab through the Link-Belt Pulse system’s screen.

The boom has five extension modes, which Knight says gives the operator a variety of boom lengths while providing the best capacity. The crane uses 7/8-in. rotation-resistant wire rope, and the hoist drum delivers 537 fpm line speed and up to 22,380 lbs. of single-line pull. Two winches are standard.

Other notable features of the TCC-1400’s main boom are its greaseless Teflon-impregnated wear pads, a wind-speed indicator, and remote-controlled floodlight. The crane also has a list chart up to 4° out of level, i.e. when the ground is uneven from side-to-side.

A new, more efficient fly-pinning design focuses on ease of assembly and disassembly for the operator. The fly extends 10, 31, and 55 ft., with manual offsets of 0°, 15°, 30°, and 45°, and achieves a maximum tip height of 243 ft. A 10-ft. swing-around fly offering 24 tons of capacity is integrated into the first stage of the fly, so operators don’t have to choose between the fly and the 10-ft. section.

At the operator’s fingertips

What operators will find when they climb into the TCC-1400’s cab is 0° to 20° tilt, standard heating and air conditioning, sliding front and rear windows, and a roof hatch. The hydraulic pilot-operated controls have fine metering capabilities and can be specified with either single- or dual-axis joystick controllers.

The cab is equipped with a 7-in. color display monitor, which provides a split view of the rear and winch view cameras, and a crane control module with a comprehensive monitoring system. A new electronic inclinometer and an auto-idle feature have been added to the crane control module.

“Unlike idle shutdowns featured on other cranes, the auto-idle feature is something an operator will truly use,” Knight says. “The operator has to select the feature for improved fuel economy, and it will automatically reduce engine RPMs to idle speeds if no function has been used for 10 seconds. The heat or the AC stays on, and the operator stays comfortable in the cab. Then when the operator hits any function in the cab, the RPMs ramp right back up to where they were before.”

The Link-Belt Pulse provides operators with readouts of the rated capacity limiter, boom extend mode control, self-diagnostics, and simulated or real-time ground-bearing pressure. “Operators can predict the ground pressure on the jobsite,” Knight says. “They can simulate exactly what they are lifting and view ground pressure changes as they swing.”

Other cab controls include climate, two-speed travel, extend and retract, and tilt.

The TCC-1400 also incorporates new features for service and safety. The dynamic electronic swing brake provides the operator with more ease of swing control. The newly designed virtual wall feature includes audible alarms and function kick-out that bring the crane to a gentle stop if one of the defined alarm areas is triggered.

Powering the crane is a 320-hp Cummins QSL 9 Tier 4 Final The cab is equipped with a 7-in. color display monitor, crane control module, and the Link-Belt Pulse engine with 1,050 ft.-lbs. of torque. For early morning and evening work, all service compartments are now backlit with LED compartment lighting. A centralized grease bank also makes it easier for technicians to lubricate the crane.

For enhanced access and egress, the crane has upper guardrails and catwalks as standard equipment.

Because Link-Belt’s primary market is North America, the company looked at how to best transport the TCC-1400 in the United States and Canada. The main transport load, which includes the crane upper and boom, weighs 96,000 lbs. The rest of the crane can be moved in three to four trucks, with each load weighing less than 45,000 lbs.

The crane is also designed to self-assemble/disassemble. “The feedback we received from customers is it’s easier to self-assemble rather than use an assist crane,” Knight says.

With the unveiling of the TCC-1400, Link-Belt expects that the longer boom will gain further acceptance in several markets, including power transmission, petrochemical, steel erection, and power industrial. “We’ve made a living making simple, robust telecrawlers,” says Bill Stramer, vice president of marketing, sales, and customer support. “They get into difficult jobs, and they are not too overwhelming for the operator. The fact that we’ve put a very long boom on one of these highly versatile cranes and achieved outstanding reach opens up additional markets for us.”