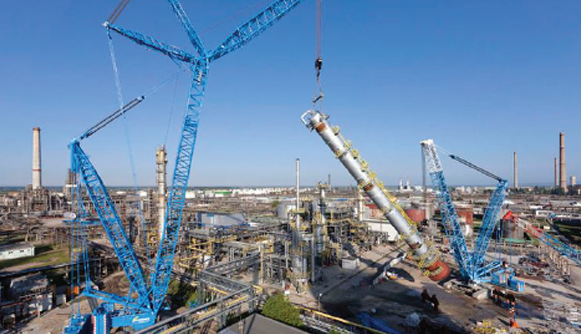 Liebherr says the first operational use for its Liebherr LR 11000 1,100-ton crawler crane has completed its first lift at a Romanian oil refinery.

The LR 11000 was used by Felbermayr to work on a constricted site with a 115 ft. by 115 ft. working area at the Petrom refinery in Ploiesti near Bucharest to lift giant steel cylinders, the largest of which measured 190 ft. in length, weighing 370-ton and with a radius of 90 ft. The erection of the lattice boom and 118-ft. luffing jib had to be completed in a narrow alley just 16.5-ft. wide.

Liebherr said that the load handling was exciting as it was not possible to determine the exact weight of the column.

This was due to additional items being fitted to the largest tank. Only when the LR 11000 and an accompanying LR 1750 had fully lifted the load did they realize it was 60-ton overweight at 370-ton.

To overcome the slewing process over a high pipe bridge, the column had to be raised to a hook height of 262.5 ft., the radius reduced and the crane moved just a few feet. Without reducing the radius of the suspended ballast pallet by around 6.5 to 44 ft., the guying roads and ballast would not have cleared the pipes and pillars.

The LR 11000 will continue to work at the refinery until the end of July. Felbermayr has a fleet of around 70 cranes working at the site, which is being shut down for a general overhaul.