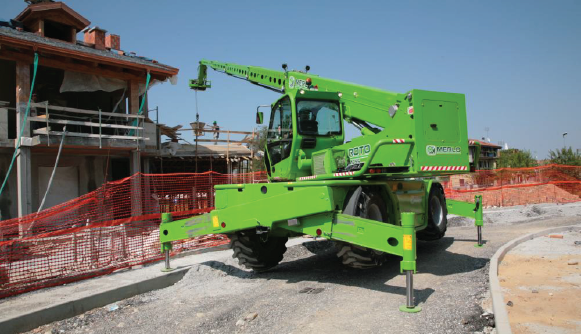 In Europe, where city streets and alleys are often narrow and twisting, and buildings are packed tightly, rotating telehandlers have long been popular because they can park in one spot and make lifts without having to travel or maneuver to pick and place loads. In North America, rotating telehandler manufacturers are making the case for expanding their use on this side of the pond.

Steven Kiskunas is product manager of telescopic handlers for Manitou Americas, one of three manufacturers that sell rotating telehandlers in North America. The other two are Dieci and Merlo.

Jack Degelman is president of Degelman Industries, Regina, Saskatchewan, Canada, the exclusive North American distributor for Dieci telehandlers. He recalls the construction of a new building at the Winnipeg, Manitoba, airport, during which the glazing contractor installed windows for more than a year.

“They loved the roto-telehandler,” he says. “Between the rotating upperworks and the 180° rotating work platform on the end of the boom, the window installers could always get square to the face of the building. Also, they could set many, many windows before having to relocate the telehandler.”

Garth McGillewie, president of Applied Machinery Sales, Pineville, N.C., the exclusive U.S. distributor of Merlo products, adds: “In addition to being able to do lots of work from one spot, a rotating telehandler generally offers higher reach than a traditional one. Merlo’s highest-reaching current model can place loads to a height of 96 ft.” McGillewie also notes that in some uses a rotating telehandler can replace a small crane, and, unlike a crane, doesn’t need a certified operator (unless it’s equipped with a winch that can lift 2,000 lbs. or more).

Different from a typical telehandler

Rotating telehandlers typically are designed with two separate sections of the machine. The lower section contains a four-wheel-drive chassis that holds the engine, travel system, outriggers, and fuel and hydraulic tanks. The upper section, or turret, carries the operator’s cab and boom.

The two sections are connected by a large swing bearing that enables the turret to rotate through 360° an unlimited number of times. The hydraulic system passes through ahydraulic swivel, and the electrical system uses an electrical collector so that the systems can operate while the turret rotates.

Because of their ability to pick and place loads in a complete circle around the machine, rotating telehandlers have outriggers both at the front and the rear of the chassis to provide a stable lifting foundation with the boom in any position.

Manitou’s Kiskunas says: “Due to the rotational operation of these telehandlers, load charts are designed to the center of the rotation bearing, not the front tire as used on standard telehandlers. A load moment indicator is typically integrated into the machine functions to assist operators in understanding the machine capacity while operating.”

The enclosed cab and sophisticated monitoring systems are found on all three brands of rotating telehandlers offered in North America. In addition, all three brands boast personnel baskets and radio remote controls that enable the operator to swing the turret, extend and retract the boom, and raise or lower the boom from the basket, providing capabilities similar to a boom lift.

A second reason is that three major rotating telehandler brands are manufactured in Italy. Geographic proximity makes the machines easier to buy and cheaper to ship within Europe than to North America.

Exposure here in North America has come slowly but is starting to accelerate. According to Kiskunas, Manitou has been importing rotating telehandlers to this continent for more than a dozen years. Dieci started offering telehandlers here about five years ago. Merlo started exporting telehandlers to Canada through Manulift EMI about the same time, and has only begun exporting its equipment to the United States through Applied Machinery Sales within the last two to three years. All of these companies either have dealer networks in place or are developing them.

Kiskunas says that although his company has seen market awareness of rotating telehandlers develop over the years, it expects the American market to continue growing as more contractors come to appreciate the units’ productivity and efficiency. To help accelerate that awareness, Manitou has held several Red Tour product demonstration events in 2013.

Innovation and growth ahead

In an effort to help build awareness of rotating telehandlers’ prowess, Manitou has held a number of events to show potential customers what the machines can do.

Meanwhile, Garth McGillewie of Merlo distributor Applied Machinery Sales says that Merlo has recently settled on the expanded range of versatility-enhancing attachments it will sell in North America.

In anticipation of growing demand for trained operators, the International Union of Operating Engineers of Ontario, Canada, recently purchased a Dieci rotating telehandler as a first step in developing operator training and testing programs.

Although it remains to be seen whether the bold prediction made by Glen Keam of Fieldworks Construction Equipment that rotating telehandlers will outsell traditional models in North America within 10 to 15 years comes true, it seems reasonable to assume that their ability to boost productivity will help elevate their popularity to higher levels in North America during the coming years.