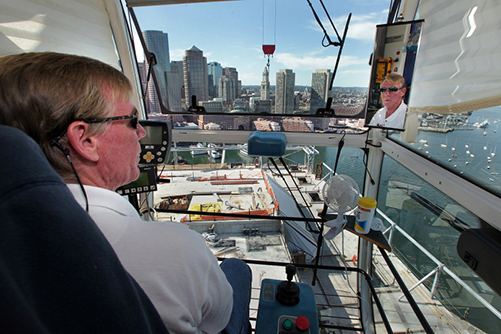 Vertex Pharmaceuticals workers wondering what the view will look like out their office windows after the Cambridge firm’s big move to Fan Pier should ask Chris Rand. But they might have to climb up 18 stories to find him.

The veteran tower crane operator has been perched high above the Vertex headquarters project for months, carefully lifting and rotating and placing heavy building materials as the complex takes shape on the South Boston waterfront.

“I’ve got the best view in Boston,” Rand boasted of his panorama on a clear day last week. “People would pay a million dollars to be up here. … It’s just a gorgeous spot.”

The tower cranes rise more than 300 feet, standing out on the Hub’s skyline among machines at other projects as symbols of the economic recovery. Mayor Thomas M. Menino quips that the crane is “my favorite bird.” An oft-repeated phrase by building trade leaders at ground-breaking ceremonies: “It’s the year of the crane.”
“We kicked off some of the momentum in the city, in terms of getting construction going and having a lot of cranes and employing a lot of the labor forces here,” Fallon Co. executive Richard Martini said of the nearly 500-strong construction crew at Fan Pier.

Crane operator wages range from $40,000 to $100,000. Through Local 4 of the International Union of Operating Engineers, workers start out as oilers and toil as apprentices for a minimum of four years.

“I have to talk a company into being in charge of a million-dollar machine and a giant operation,” said Brian Sweeney of Middleboro, Rand’s oiler for several years. “It’s like the gentleman’s club. You kind of have to kick the door down to get in.”

A third-generation operator, Rand controls the crane with a pair of joysticks and a computer monitor that indicates the boom radius, hook height, load on the steel cable, tower movement and wind speed. Powered by a massive electric motor, the crane can lift up to 35,000 pounds. An alarm sounds if the wind hits 35 mph, when it’s time to prepare for a shutdown that becomes mandatory at 45 mph.
“If I can’t control the piece, I might not even wait for the alarm. Somebody can get hurt … and it just isn’t worth it,” said Rand, who also dodges lightning strikes in summer and chips through iced-over ladders in winter.

Working at such hazardous heights, he added, “you always have to be mindful of what you’re doing. Every move is calculated.”