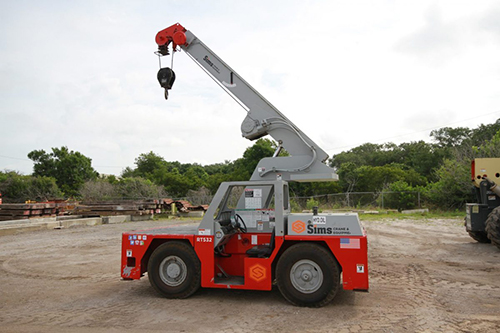 Across the board, demand for carry deck cranes is largely up over last year and manufacturers are reporting they expect 2013 to be even better.

“Rental rates, for the most part, are increasing and dealers are very satisfied with the performance and utilization of industrial cranes,” McCallum and Sauders say. “Demand is definitely higher than the 2008 through 2010 downturn. We can safely say we are getting back to ‘normal’ sales volumes and demand. Dealers are getting industrial cranes into new or different markets, thus increasing demand and usage.”

For Broderson Manufacturing Corp., who has produced industrial carry deck cranes for more than 35 years and just celebrated its 10,000th unit off the line, the market has been solidly up over the last year.

“Based on feedback from our dealers we feel demand will remain strong through 2013,” says Jim Miller, district manager for Broderson. “Five years ago demand for our cranes was at an all-time high. Though we have not reached that level again, we are approaching it. Large jobs are pushing the utilization rates at our dealers and they are growing their fleets to meet the demand.”
According to Miller, North American demand is currently broad based. Broderson’s key markets include petro-chemical, automotive plants (new construction and maintenance), pulp / paper and power generation.

“[Our markets] that we serve are in expansion/improvement mode and our dealers are beefing up their rental fleets as well as retailing machines,” Miller says.

For Italian-based Valla, which produces electric carry deck cranes among diesel units, demand is also on the upswing. “In the last few years, we have been gaining more exposure and interest in the North American market, which have only been linked to positive outcomes,” says Elisa Muntoni who manages North American sales for the company.

Valla has been operating in the U.S. for three years and targets a niche market with its cranes. Mostly, the units are used in construction, automotive, aerospace, tire manufacturing, power plants, plant maintenance, chemical, petrochemical, marine, glass, stone, paper and textiles.

“Our machines are electric so they produce zero emissions and give users the ability to utilize them indoors.  They are ultra compact and do not include outriggers,” Muntoni says. “[The cranes] are very maneuverable and precise, which allows them to be used in tight areas, reaching into tight spaces and while the boom moves loads with great stability.”

For Manitowoc’s line most applications are factory work related, but carry decks also work in refineries, automotive and manufacturing. Like its competitors, Manitowoc sees its industrial cranes being utilized for a variety of industrial applications in tight spaces where lifting solutions are needed, or on yards that require the typical carry deck application.

“Currently, the most active industrial cranes are the 9 ton and 15 ton cranes, which are widely accepted by most industries and rental fleets,” says  McCallum  and Saunders. “The industrial crane is not too complex for operators and they feel comfortable when operating one.”

What could be even more popular, too, is a new unit. Broderson is currently prototype testing a new 25-ton model that will go into production late this year – the IC-400. The company is also working hard with engine regulations.

“We are putting a huge engineering effort into moving to Tier 4i and Tier 4 engines for all models,” Miller says. “We are also aggressively pursuing CE/EN13000 certification for European markets. We just finished this certification for our IC-250.”

Valla is seeing a growing trend toward “being green and decreasing emissions as much as possible,” Muntoni says. “That is why our electric cranes have been gaining market share and attention in North America.”

According to Muntoni, the U.S. Navy, the Port Authority of New York and New Jersey all have mandatory rules about lowering waste and emissions, which drives demand.

“Another change that we are noticing is linked to the current condition of our economy.  Since many companies have been looking for ways to cut costs, many have resorted to downsizing their square footage,” Muntoni says. “Our cranes have been helpful to many companies that have space limitations because our machines have small footprints, which allows effortless maneuverability and they have the ability to carry large loads. All these reasons pushed United Rentals to think ahead and decide to include several models of our cranes in their fleet.”

Valla’s best seller is the 25E (2.5 tons of capacity), which is used for curtain wall applications in mid- and high-rise construction. In the mid-range, the company’s 75E (7.5 tons capacity) is popular and is used for construction and power plant maintenance and in the large-range, its 400E (40 tons capacity) is the go-to unit for industrial moving, industrial production and steel mills.

Meanwhile, Manitowoc says it is working on something new in the carry deck arena. “[We are] known for our appetite for innovation,” says McCallum and Saunders. “We are constantly working on our product lines and the industrial crane line is no exception.”
Manitowoc is also noted that it is seeing interest from Latin American companies for carry decks..

Overall, no matter the demographic, industrial crane customers expect their cranes to be as simple and as rugged as possible. “The innovations we integrate into our new products and projects are focused on reducing cost, creating commonality among our components and improving performance,” says McCallum and Saunders. And that’s likely not to change any time soon.