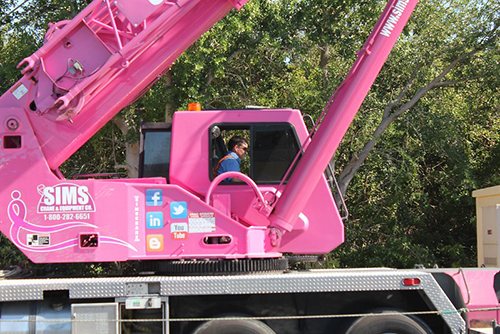 Florida Virtual School was on hand as well, handing out prizes near the West Grandstand.

As the Mary Helen waited in her spot in the starting line-up many attendees asking for the story behind it all, and asking to sign the crane approached her. One woman, Patty McLean, was diagnosed on June 10th, 2010 with stage 3 breast cancer. After six rounds of chemotherapy, a bilateral mastectomy and 12 weeks of radiation she is now cancer free. She credits having a positive attitude, and the support of her friends, family and community for her survival. “Hearing stories like this, of the Mary Helen… it means a lot,” said McLean. “It reminds me that other people have gone before me and made it. Other people have gone before me and didn’t make it. A lot of people, who didn’t make it, didn’t have that community support. It’s so important.”

As CCO Dylan Sherman drove the Mary Helen down the parade route, the crowd applauded and cheered as she passed. Many had tears in their eyes, and thanked us as we passed by.