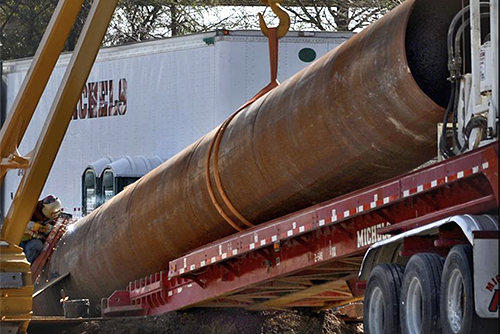 Crews from Haskell and Jacksonville Electrical Authority (JEA) began working on installing a new water pipe under the St. John’s River in August. It’s thought to be the longest and largest placement of pipe, in length and diameter, attempted under the St. Johns, said Paul McElroy, a Haskell construction director overseeing the project for JEA.

The pipe under the river can carry 20 million gallons a day and will become the backbone for a 8.3-mile network that will connect JEA’s supply lines north and south of the river.

It will run 100 feet under the main low tide, and will increase clean water output. JEA’s water system consists of 136 artesian wells tapping the Floridan aquifer, which is one of the world’s most productive aquifers. Water is distributed through 36 water treatment plants and 4,208 miles of water lines. More than 3,760 miles of collection lines and seven regional and seven non-regional sewer treatment plants comprise the JEA sewer system. JEA’s reclaimed water system, which supplies water for irrigation purposes, reduces nitrogen release to the river because treatment-enhanced wastewater isn’t put back into the river. Using reclaimed water for irrigation also reduces the demand on the potable water supply taken from the Floridan aquifer.

JEA’s wells north of the river have water to spare, but the ones on the on the Southside are hard-pressed to keep supplying the city-owned utility’s customers. Some Southside wells have had problems with saltwater intrusion, which will increase the more they’re pumped.

Connecting the two supply grids is expected to cost $50.4 million, and is written into environmental permits the utility needs to keep drawing water from the aquifer.

JEA is expected to work until September 2013 knitting together and burying the lengths of pipe reaching from downtown to near Bradley and Cortez roads on the Southside. The part under the river will be the hardest step, and will be finished around August.

“By connecting the water systems on both sides of the St. Johns River, JEA can balance its water withdrawals from the Floridan aquifer and protect one of our most important natural resources,” said Greg Corcoran, a JEA spokesman.In order to install the pipeline, horizontal directional drilling was used on both sides of the St. Johns River south of the Mathews Bridge. The process began with one crew drilling at Beaver Street near EverBank Field and another crew drilling south of the foot of the Mathews Bridge. They drilled toward each other until the two tunnels connected. Once assembled, the pipeline will be pulled through the tunnel by a 1.2 million-pound drilling rig. Sims Crane & Equipment has five cranes on site for the project, including two 125 ton cranes, two 100 tons and a 60 ton. Three branches are represented – Mulberry, Orlando and Jacksonville, and a crew of eight operators and six apprentices. In order to move the pipe, which weighs more than three million pounds into the tunnel they are using a cradle rigging with rollers to send it through.

Work will be completed by the end of August.