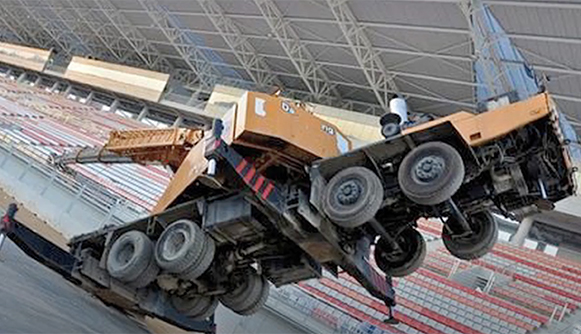 Recently a 300-foot crane collapsed, toppling onto a building under construction in Long Island City, Queens, trapping three workers under debris and injuring seven. The crane smashed onto plywood and concrete, and wreckage could be seen stretching for hundreds of feet. Buildings Department Commissioner Robert Limandri said it appears the crane operator attempted to lift a load of 23,900 pounds on the crane, more than double the weight capacity for the crane.

Limandri said the operator was unable to see the load being lifted and he was apparently trying to lift the materials outside the approved loading zone. The operator’s license has been suspended, according to Limandri. A stop work order for crane operations at the construction site remains in effect while the investigation continues.

How could this have been avoided? There are several factors that can contribute to a load overbearing accident.

Too often the end user provides an inaccurate load weight or only guesses at the weight.  Sometimes errors in paperwork during the planning process, or oversight of fluid materials contained within an object such as a tank renders manufacturer information inaccurate.  Manufacturer information plates on equipment often only list the “dry weight,” or weight of equipment while empty.

Crane operators and erectors must check that the crane has the correct counterweights and boom configuration for the lift, and that the Load Moment Indicator (LMI) is properly programmed.  The load moment indicator device is a secondary device meant to warn the operator of exceeding capacity and is NOT a device that should be used to verify or confirm the weight of a load.  Load weight must be determined prior to make the lift.

Partial or zero counterweight lifts may also be very dangerous when the load charts for such configurations are not properly understood, or when making a lift on poor ground conditions.

What are our OSHA B30 Duties?

The crane operator must use load charts to confirm the correct crane configuration for the load, site and lift conditions and verify net capacity with the lift director for the load and rigging weights provided.  The lift director will confirm load weights, ensure that the load is properly rigged and balanced, and prepare the site for lifting operations.