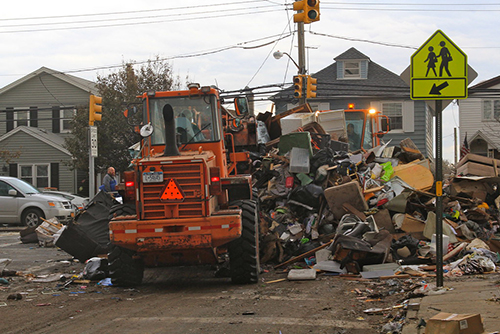 Cranes and specialized transport equipment from across the United States are being dispatched to hurricane-ravaged New York City, Staten Island and throughout the state of New Jersey in the wake of clean-up from Hurricane Sandy.

After the initial rescue, recovery and emergency delivery of supplies to those stranded in heavily impacted areas has been the restoration of transport systems and the hauling away of millions of tons of debris, including more than 250,000 wrecked automobiles.

Getting regional transportation systems up and running has been a priority of the New York City and New Jersey transit authorities. Bay Crane assisted the New York Metropolitan Transit Authority in transporting and lifting subway trains onto their tracks. The trains were hauled in two parts, the upper car portion and the lower railway suspension and wheels. Bay Crane crews lifted the lower portion onto the tracks and then added the passenger cars on top for installation.

“The project was the relocation of train cars to serve an area where the bridge had washed out and railcars no longer had access to the area,” says Kenneth Bernardo, Bay Crane president.

The train cars weighed around 80,000 pounds (36 tonnes) each and measured 60 feet long and 12 feet wide (18 x 3.7 meters), according to Bernardo. Bay Crane crews have also been dispatched to move heavy trees that fell on houses and buildings.

“In our area, whipping 80 mph (128 km/h) winds and drenching rains caused power outages for many customers and this was the worst storm in our company history,” says George Young, president of George Young Co. “[We] re-opened for business Tuesday morning at 10 a.m. with all staff reporting – this was within one hour of the state of emergency being lifted in New Jersey. Hurricane Sandy passed quite close to our Swedesboro, New Jersey facility, which held up remarkably well.”

Young gave credit to the preventative steps by his staff and congratulated his employees on their “willingness to immediately re-engage and help our clients.”

One the company’s first assignments was to begin removal, transportation and subsequent replacement of electrical generation and distribution equipment at the Conoco Phillips Bayway Refinery and their associated co-generation facility. “The work has continued almost uninterrupted and our client’s project team appears quite organized,” he says. “Turnaround times for the repaired equipment have been surprisingly compressed.”

Another assignment involved the removal and replacement of electrical distribution equipment in the Chester Country area for Exelon’s Philadelphia Electric. James Jordan, project manager, George Young Co., says most of the work his crews have performed has involved the rigging of transformers and motors and transportation to a repair shop in Philadelphia. The largest transformers weigh about 7,000 pounds (3 metric tons), he says.
“Right now they are putting this equipment and transformers into an oven to bake out all of the moisture so that they don’t have to replace them,” Jordan says. “So far, I’ve been told the process is working.” Once the equipment is dried out and rehabilitated they will reverse the rigging and transport it all back to the power plant.

Jordan says his team has had to work very carefully and diligently in dealing with live electricity and related equipment that has been flooded because much of the work is hand rigging. “We have proceeded with caution and it’s been a total team safety effort,” he says. “It’s been a great team effort to get the refinery running and the power plants generating electricity to get everyone up and running.”

Power restored with the help of truck cranes

Based in Philadelphia, Sautter Crane has dispatched truck cranes to power plants throughout the region. “We are doing a lot of work for Exelon and First Energy,” says Bob Sautter. “We are sending cranes out for tree removal, downed telephone poles and transformer repairs. We have picked up some boats. We have supplied cranes for many reasons. We’ve been working since Sunday, and it’s just now starting to get a little back to normal but we are still not there.”
Most of the boat pick-up has been centered in the Sayreville, New York, area, Sautter says. “There’s a lot of devastation in those areas. They are all slowly getting power back. It’s going in the right direction.”

Kris Rzepkowski, executive director of marketing, Bennett International Group, based in McDonough, Georgia, says his company has hauled hundreds of loads of equipment and supplies to three states that suffered hurricane damage. “We took over 150 loads of generators and supporting equipment to New Jersey, New York and Connecticut for a major telecommunications carrier,” he says. “This equipment is helping facilitate phone service and 911 emergency communications.”

One of the most compelling images of the storm was the damaged Favelle Favco tower crane that blew over and for several days its boom dangled precariously over West 57th Street in Manhattan. Streets and businesses in the area were closed and residences evacuated until the crane could be secured.

According to news reports, general contractor Lend Lease brought in engineers and crane experts from Europe and Australia to determine the best way to secure the crane to keep the boom from falling and then to eventually dismantle the crane. According to the New York Times, the company has said it will cut the broken boom in five foot sections and use construction hoists to haul it down from the tower.