Bear Stuck in a Tree, Rescued by a Crane 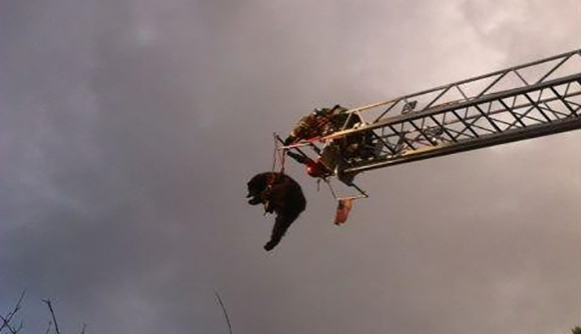 What happens when a 200-pound bear gets stuck up high in a tree? It gets photographed while being lifted with a crane, of course. Dramatic photos were posted to the Colorado Springs Fire Department Twitter account on Sunday, documenting the entire incident with the bear.

According to the CSFD, a female black bear climbed and got stuck in a tree Sunday morning, though Colorado Springs residents did not notice the bear until about 3:00 pm that day. That’s when the fire department and officers from the Colorado Parks and Wildlife Department were called in to subdue the bear.

The teams first tried to subdue the bear with a tranquilizer but were unsuccessful, prompting the bear to climb up even higher into the tree. As crowds grew to witness the incident, officials fired a second tranquilizer dart to sedate the bear. Five hours later, the bear was removed from the tree by a crane operated by the CSFD, which posted photos on Twitter of the bear being lowered by a firetruck ladder.

Wildlife officials released the bear into the wild 100 miles away from the tree. This latest incident brings to mind a similar occurrence last year in Colorado when another bear was caught in a tree at the University of Colorado at Boulder. Wildlife officials hit the 200-pound bear with a tranquilizer dart to subdue the creature before being dropped onto mattresses placed below the tree.

According to a Colorado Parks and Wildlife spokesperson, bears typically are spotted in March and April while searching for food after hibernating during the winter.