Another Record For a Liebherr Crane 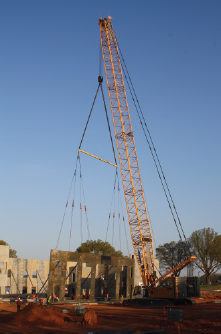 This panel will be part of a new high school building of the school complex York Preparatory Academy in Rock Hill. It was the fourth building on the campus – the other three were already built last year. School construction has been completed in less than seven months.

Tilt-up construction is a quick and cost-effective solution for end-users. Techniques for tilt-up construction have been further developed in recent years, making it suitable for more types of buildings. With most of the work done on ground level, the method is known for being fast, safe, and efficient technique. However, it requires careful planning and a high-performing crane to do the lifting.

Jason Swagert, vice president of the contractor says the LR 1300 gave them the unique opportunity to do bigger and heavier tilt-up panels because of its load chart. “The operator also loves the crane due to its ease of operation and all important machine data can be accessed from our office via the onboard LiDAT system”, says Swagert. “ The winches have higher line pull and are faster than other machines in this class – which makes it also the perfect machine for us for hanging steel.”

Another distinguishing feature of the LR 1300 is its significant number of boom and jib configurations and thus potential applications. The combined length of main boom and luffing jib can be as much as 564 ft.